HEAD is one of the biggest brands in the sport of tennis. Not least because of the legendary HEAD tennis rackets so many top athletes have been relying on for decades––and are still doing to this day. In the late 1990s, HEAD bought the well-established tennis ball producer Penn to add expertise in this previously unchartered territory. Since 2006, HEAD has been distributing tennis balls under its brand name. HEAD tennis balls are used in numerous tournaments and are very popular with pros and amateurs worldwide due to their quality features. Apart from HEAD tournament balls, the range includes HEAD practice balls and HEAD Play & Stay balls for kids. Order your favourite HEAD tennis balls online at Tennis-Point. 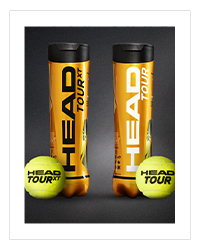 Which HEAD Tennis Balls Are Best Suited to my Game?

Naturally, choosing the right HEAD tennis ball depends on various factors, such as the surface you play on or your individual skill level. However, two aspects all HEAD tennis balls have in common are playability and harmonious bouncing characteristics––even after several sessions. Generally, HEAD practice balls don't need to be renewed as often as pressurised tennis balls. This also applies to HEAD tennis balls used for the ball machine.

By the way, the ball series "HEAD No. 1" is the official tournament ball of the German Tennis Federation. This tennis ball is very long-lasting and has exquisite bouncing properties, which has its price, of course. Hence, it is the most expensive HEAD tennis ball on the market. If you want to spend a little less, you will find excellent alternatives in the "Tour", "Instinct" and "Championship" series. A good way to find out which HEAD tennis balls suit your individual style the best is by trying several before going for a particular model.

As the official partner of the German Tennis Federation and tournaments worldwide, various ITF-approved tennis balls are part of HEAD's product range. These certified HEAD tennis balls fulfil all requirements for an official tournament ball. At the same time, HEAD also serves the amateur sector with various types of balls, including pressurised tennis balls and HEAD pressureless tennis balls. These make particular sense for coaches due to their increased longevity. At Tennis-Point, you can get them in larger amounts as attractive ball packages in combination with, for example, ball buckets, ball carts or ball pickup tubes.