As much as it could have with its bright coloured designs, sportswear label Ellesse did not initiate the retro trend. However, it sure benefied from it. With the rise of appreciation for designs from the older days, Ellesse tennis clothing has become increasingly popular among tennis players: fashion-conscious women hit the court in extravagant Ellesse dresses and shirts, while men heavily lean towards the brand’s shorts and shirts.

The year was 1959, the place: Perugia, Italy. Which is where Leonardo “Mantis” Servadio founded his sportswear label Ellesse. Its name simply derives from the Italian spelling of the founder’s initials “L.S”. Therefore, the brand never abandons its roots, even though it has moved its headquarters to London.

Ellesse’s logo shows an orange, cut-in-half tennis ball in the centre and two ski tips on the left and right. This setup points directly to the label’s roots: skiing and tennis. After mainly focusing on modern ski clothing during the 1970s, the brand shifted more towards tennis in the 80s. Especially after Boris Becker had lifted the Wimbledon trophy wearing a training jacket with the Ellesse logo on July 7th 1985, almost every tennis player knew the emblem with the cut-in-half tennis ball.

Even more so, since Ellesse was among the first labels to skilfully and media-effectively place logo and brand name on its fashion items. That approach helped find brand ambassadors far beyond the tennis court, with boxing legend Muhammed Ali and Rolling Stones frontman Mick Jagger also showcasing the label’s apparel. 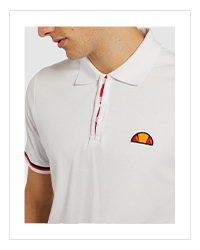 Ellesse used the retro trend to re-awaken interest for its fashion items. To underpin the message, the brand uses pictures from the 1980s showing icons such as Boris Becker, Roger Moore and Muhammed Ali wearing its products.

That lead to younger people increasingly wearing Ellesse fashion in recent years, which helped those cool shirts, hoodies and sneakers to a huge comeback. The extravagant style, combined with high quality and Italian roots, resonates particularly with the younger generation.

Which Ellesse tennis clothing our customers particularly like? We have picked out some of our top recommendations for you:

Besides, at Tennis-Point, you will also find highly fashionable Ellesse sweat jackets, ball shorts, as well as Ellesse tracksuit bottoms and leggings.

One piece of advice: When browsing for Ellesse sportswear, you can set filters –for example, gender, size, or price – to pick from an individual selection.

Take your time browsing our tennis online shop’s wide range of Ellesse clothing and pick your new favourite item. We are sure you will find just what you are looking for – and do not miss out on our deals which you can find under the “sale” section. There, you are sure to make a bargain. The Tennis-Point team hopes you enjoy browsing Ellesse’s selection for timelessly elegant tennis clothing.