The French tennis brand Tecnifibre is not yet as familiar a name in the tennis business as some long-established manufacturers. However, this doesn’t take anything away from the quality of the tennis balls, which is top-notch. They stand out thanks to excellent bouncing properties, as well as durable materials. At Tennis-Point, you can order Tecnifibre tennis balls online at a reasonable price, and they will arrive at your door within a few days. Experience the difference Tecnifibre tennis balls make to your game. 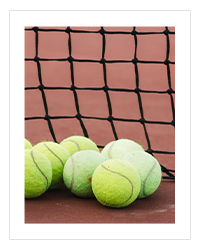 Initially, Tecnifibre was best known for producing quality tennis strings. In 1988, the French tennis brand became the official stringing partner of the French Open and is still to this day. Since 2001, Tecnifibre has been making tennis balls in its own factory in Thailand. At that stage, the final part of the tennis triangle left missing were rackets––however, not for long, as Tecnifibre soon launched its first tennis rackets series.