For more than 20 years, the German sports brand Balls Unlimited has been dedicated to developing top-class tennis balls. It almost seems as if founder Ralph Papenfuhs saw his career path laid out before him from day one. In the late 1960s, his father, who ran the colour research centre at German chemical giant Hoechst, invented and patented the yellow colourant that characterises many tennis balls to this day. As plain as they might appear when rolling out of a can, as complex is the interaction between their key elements––felt and rubber. At Tennis-Point, you can order the unique Balls Unlimited tennis balls online and experience the difference yourself.

When it comes to choosing the felt, Balls Unlimited breaks new, uncompromising grounds. The tennis brand is the only manufacturer in the world using English Playne's felt, which is outstandingly long-lasting. It took three years of constant testing, evaluating and optimising countless different balls until Balls Unlimited was ready to unleash its range of tennis balls to tennis players in the whole of Europe in 2014.

Merely half a year later, the Balls Unlimited "Code Black" tennis ball finished first in the ball test of German journal "Tennis Magazin". In 2016 and 2019, the Code Black won again for best price/performance. 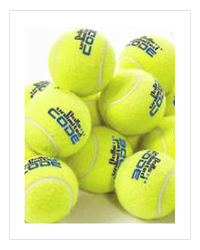 What Types of Balls Unlimited Tennis Balls are Available?

There are two main tennis ball production methods, both of which bear their unique advantages. All tennis balls, regardless of the production method, have to comply with the guidelines set by the International Tennis Federation (ITF). Pressurised tennis balls are usually manufactured in a ball press that fills the inside with compressed air to create a higher internal pressure. This internal pressure, however, subsides with time because natural rubber is not completely airtight. As an effect, the ball loses bounce and becomes softer.

With the right choice of felt, Balls Unlimited seeks to limit that effect. Therefore, only high-quality Playne's felt is used in the production of Balls Unlimited pressurised tennis balls. It provides excellent shock absorption and is characterised by its soft and fluffy surface. Plus, a deeper-seated felt composite compensates for the loss of felt fibres during a match. The material slowly becomes thinner and reduces its cushioning effect in line with previously defined specifications.

For the development of Balls Unlimited tennis balls, it is crucial that the subsiding internal pressure and the shock absorption of the Playne's tennis ball felt are systematically coordinated and in balance for as long as possible. The result is maximum longevity and comfortable, arm-friendly playing characteristics with steady aerodynamic and bounce characteristics.